I just want to take a moment to respond to the overwhelming response to my blog post last week asking for prayer for the family of San Diego Police Officer JD De Guzman, as well as prayer for the SDPD and others in the community.  I received hundreds of comments and emails that were very moving, especially those from the many police officers who took time to respond.  Thank you for your kindness and mostly, for praying for all of those involved.

Many people have asked how they can help, and there are many ways to do so.  Soon, I’ll let you know more about some ways to get more personally involved.  For now, please continue to pray for the things I mentioned and consider supporting the family of officer DeGuzman and supporting the recovery needs of Officer Irwin and his family.

You can support the family of Officer De Guzman through the San Diego Police Officers Association’s Widows and Orphans Fund.   You can give online here (make sure to put “Deguzman” in the comment field, or simply by sending a texting “DEGUZMAN” to 41444.

Officer Irwin and family can be supported by visiting this GoFundMe page:

Please note that while Officer Irwin is still employed by the city, this fund is to help cover family expenses and lost income during his recovery.  More information is available at the site.

Again, thank you for your prayers and your kind comments.

Like millions of others, I sat down with my boys to watch the end of the first half of Monday Night Football this week so the we could enjoy the new trailer for the new Star Wars movie, The Force Awakens.  It was the highest rated last moments of a 2nd quarter and MNF halftime show in quite a while.  Why so much excitement?  It’s because the bulk of people my age are looking longingly to J.J. Abrams for the latest attempt to have a continuation of our childhood.

It’s true.  I saw the original Star Wars in the theater when I was not quite 6 years old. I managed to see it 10 times in theaters, which was quite an accomplishment, not just for a 6 year old, but at a time when there weren’t many theaters around anyway. Our town, Palmdale, California, had one lousy theater – The Palace Theater.  The Palace was known for having a huge Coke stain in the middle of the right side of the screen, and also for having a lumpy floor as management simply painted over dropped Milk Duds rather than scoop them up.  It was a jem, I miss it.

This kid-like feeling we Generation X people now have about the Episode VII release was briefly ignited in 1999 when the first Star Wars prequel, The Phantom Menace, hit the theaters.  I waited in line outside for hours for the first midnight show, along with my new girlfriend at the time.  She stood there with me in the cold and rain surrounded by the nerd elite.  Naturally, I married her.   That night, we bonded emotionally as we experienced together the absolute horror of what was Episode I.  The audience’s bad feeling about this began with the scrolling of the words “Trade Federation” and culminated in the opening scenes with the emergence of the dastardly Jar Jar Binks.  At that moment, just 10 minutes into the movie, we felt a great disturbance in the theater, as if millions of childhood voices suddenly cried out in terror, and were suddenly silenced.

But today, we are expecting to finally be able to put that behind us, to find closure and a new hope, in a new Star Wars film that reminds us why we went to experience it so many times in the 1970’s and 80’s.  So we watch the trailers repeatedly, record our reactions, and post them for others to see.  I can’t imagine it can get more nerdy.  Well, I don’t know, I can imagine quite a bit.

There is something else I was looking for, rather, listening for in the trailer.  The music.  Would we get a feel for the new score by John Williams?  The music itself was arranged by composers who do music for trailers, but supposedly, it was inspired by Williams and then adapted from the previous movies.  For me, the music of this new Star Wars flick will be just as important as the story.

What is the last film score that we have heard that has left a lasting impression and universally recognizable tune in elevators or at symphony concerts?  I remember walking out of the most recent Indiana Jones movie, disappointed, but nostalgic, humming the familiar theme song in the parking lot.  It occurred to me that it had been quite a while since there was any comparable and memorable theme music to a movie.  Don’t get me wrong, there are some great scores today, however, we don’t hum them or remember them for very long after the film.  But nearly 40 years later, we still hear and immediately recognize themes from Superman, Indiana Jones, Chariots of Fire, Jaws, Rocky, and of course the music of the Star Wars saga.  If you are older or younger, I bet you know all of those too.

Well, I was not disappointed.  The trailer’s music was wonderful.  Some brilliant person thought this too and created a version of the trailer without the voices and narration and just the score.  That’s really the reason I wrote all this, so that you can listen with me.

Below is the most recent trailer with the voices and narration removed and the music remastered.  Close your eyes if you are trying to avoid spoilers (there really aren’t any here), but turn your speakers up or put on you best headphones and listen…

The music is it’s own dialogue. The trailer might even be better this way,

For comparison, you can watch the original here:

This is a personal note. 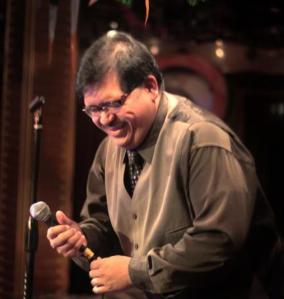 My good friend Carl Flores passed away unexpectedly a couple of weeks ago.  He was only 45.  While he had some health problems, his death was not expected.  I was privileged to be the officiant at his funeral, and also honored to be a part of it with so many long time friends who made it an amazing celebration of a person’s life.

Perhaps the most profound realization we walked away with is that most of us, the 300 or so in attendance, really had no idea what Carl did for a living.  His professional resume, whatever might be on it, was not on display.  No one mentioned it.  His military service was acknowledged as is proper for those who have served our country, however, the honor guard was not the usual military provided contingent.  Instead, it was made up of Navy friends including a classmate from the Naval Academy.  Indeed, Carl was honored by several from the Navy, officers and enlisted persons, not for any particular Naval award, rank or achievement, but for his enduring friendship to these men.

His friendship extended to those he knew and served from his church, his job (wherever that was), and various social circles, most notably southern California dance clubs and other related fun.  People from each of those relational worlds described him in the same way – as kind, generous, a servant and a great friend.

Hundreds of different kinds of people lined up to say thank you to a guy who by most standards was not accomplished.  He wasn’t married and didn’t have kids, he wasn’t wealthy, healthy, or tidy.  He had no significant titles or championships or celebrity.  By no means was he perfect or without the personal battles that everyone has, and these were known to many as well.  But to state it simply, Carl was a true friend, both to the righteous and to the sinner.  He was grace on display in so many respects.  This is something a Christian should be known for.

Carl was a successful man, a follower of Jesus, who loved God and loved people.  I believe he followed Jesus into resurrection, and I will see him again one day.

Want to watch Carl’s memorial service?  It’s long, but the music is good, the speakers are interesting and funny, and the inspiration and legacy of my friend Carl might even change your life.