My son James asked me if we have any soldiers in our family to remember today.  So, for Memorial Day, my family is remembering William M. P.  Furrow, Civil War veteran, 51st Illinois Infantry Regiment, Company E.  He joined the Union Army on February 26, 1864 and was discharged for disability on June 19, 1865.  We aren’t sure what the disability was, but I’ve heard from my father that he heard from his grandmother that William Furrow had an arm shot off by a cannonball somewhere near the end of the war.

For whatever reason, the Furrow family history does not include a lot of military service, especially in combat.  That is, as far as I can tell.  Our family tree hasn’t been cared for very well.  It has some hidden branches and also some branches that need to be pruned.  For example, I got a note today from someone at Ancestry.com asking me if I could provide more information for a relative in my tree that apparently was still having kids a couple of years after his death.  I’ll need to fix that.

Our family doesn’t actually know much about William M. P. Furrow, other than he was a farmer and sold butter by the pound, proving beyond any doubt he and I are related.  Also, you can probably churn butter with just one arm…

We’re not exactly sure what the “M. P.” stand for.  I am fairly certain “M” stands for “Mathias” as it is his dad’s name and probably his grandfather’s name.  But I’m not sure if that’s really a part of his name as he is more typically listed as “William P.”   The “P” is even more tricky.  Most people who share his family tree think it’s “Perry,” but that name doesn’t appear anywhere else in the family.   One person is convinced it’s “Plimell,” which is his mother’s maiden name.  That is possible, maybe even probable.  But we’ll go with Perry for now since it’s the most common.

A couple of years ago, while researching family names and searching for potential names for our kids, I found a picture of his gravestone.  I knew the cemetery and plot number, but at the time photos were not attached.  But I found a website where someone had gone through and posted pictures of every grave.  The problem was that the photos were not in order and not labeled.  I spent about an hour looking for great great great grandpa’s headstone and then I found what must be it: 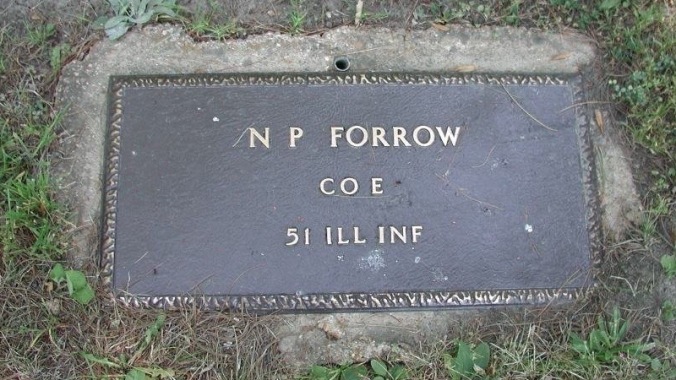 N. P. Forrow?  Who is that?  I looked in the list of members of the 51st Illinois Infantry, Company E, and there no such name.  The only name close is William P. Furrow.   Someone messed up the headstone!  How could the VA make this mistake?  Well, don’t answer that.   Since this isn’t the original headstone, my theory is that some friendly group replaced it at some point but couldn’t read the original stone which had likely deteriorated.  Perhaps they didn’t have a list of Company E.  They also didn’t have Google.  So, I’m sure they did the best they could.

Well, it bugs me.

Ever since I found this, I’ve wanted to replace it, but I can’t really justify the expense.  However, it occurred to me just this morning that perhaps the Veterans Administration created this marker at some point and maybe they would correct the error and replace it?  So, I’ve looked it up and discovered that they may actually replace it at their expense (read: our expense as taxpayers).  Since he’s buried in a private cemetery, they won’t cover the expense to lay the new stone.  So, I downloaded the complicated government form which requires me to have certain probably unattainable information, but, I’m going to see what happens if I begin this process.

For some reason, it means a lot to me to fix this.  Unlike a certain posthumously progenerating prunable branch on my tree, I am certain about William P. Furrow’s place in our family.  So certain, our second son’s middle name is “William” in honor of him.

I seems to me that our veterans, even the ones we don’t really know, deserve to be remembered correctly, even if just by a marker in a rural cemetery.   One day, I hope to visit Wallace Chapel Cemetery with my family and see the brand new stone marking the grave of a Civil War hero.

“The mystic chords of memory, stretching from every battlefield and patriot grave to every living heart and hearthstone all over this broad land, will yet swell the chorus of the Union, when again touched, as surely they will be, by the better angels of our nature.” – Abraham Lincoln

One thought on “A Family Memorial Day Fix”